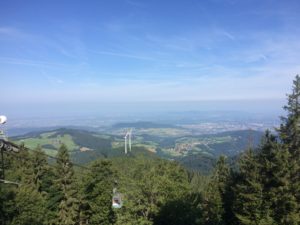 This week was marked by lots of cake, a visit to Freiburg and the continuation of our trip towards Italy. On Saturday we started with a party, because of the birthday of our hostess. There were not many visitors, because there was not much room inside with the wet weather we had that day. Still, the day was all about preparations for the birthday party. Pim made some hummus and muhammara. Els was very happy to bake a (vegan) brownie, which was well appreciated. The hostess made a cake with the blueberries we had picked the day before: also very tasty! At the end of the day it was dry again and time for a fire outside, with guitar music from Pim and even cocktails. A nice ending to our visit.

After a nice breakfast, with a piece of leftover cake, we continued on our way to Freiburg on Sunday. That was too far for one day so we visited another campground. On the way we had regular views of the Black Forest in the east and sometimes the Vosges Mountains in the west. Otherwise, not a very interesting part and a number of heavy showers that largely drifted by but we also got one on our heads just before the campsite.

On Monday it was not so far to Freiburg and it was getting warmer. So we stopped in the afternoon at the Seepark in Freibrug to sit by the lake and swim. In the evening we were warmly received by a new host and hostess with whom we had come into contact through warmshowers. We were immediately invited to come along to their garden outside the city. It would be a tough bike ride, we were told, but we were in for it after our afternoon in the park. It was indeed quite a climb but we were taken to a place on a hill with a beautiful view. There were fruit trees, a vegetable garden, chickens and bees. We drank and ate there, the animals were taken care of and we enjoyed the view. When we returned home, they cooked us a meal and we also had a cake for dessert, baked by the daughter of our hostess.

We were very lucky with our hosts. Not only because of their hospitality, but also because they were among the first inhabitants of Vauban: a textbook example of a sustainable district. In the first years of this century they literally helped to build the district; a building in which they no longer live, by the way. Partly because the residents themselves helped to build it, Vauban has a very close-knit and involved community, although this is changing over time. It is perhaps precisely this community that ensures that greenery and sustainability shine through in the district. Although it often doesn’t go far enough (and fast enough) according to several residents.

Our host was going to give us a tour of the district on Tuesday afternoon and also gave us various tips for other projects in the city. However, we started our day by cycling back to the Seepark, to the Ökostation, where we spoke with Svenja Fugmann. The Ökostation is similar in construction to an earth house (see our blog about earth houses in Olst); built with local materials and focused on efficient use of energy. The station was already built in the 1980s and houses an education center for sustainable living and nature. She provides green school classes, but also helps develop educational materials and is an important hub in the network of green organizations in Freiburg. A blog and podcast about our conversation with Svenja can be found here.

We had a drink at Der Gewerbehof in the afternoon but, due to the heat, decided to shop for dinner in time and go home to prepare it. In the evening we got to enjoy the greenery of the Vauban neighborhood during a tour of Energy Plus buildings, car-free streets, a (residential)van borough, a lively community center, spare parking space transformed into a park and a large international garden where refugees, among others, help out. It was extra fun to walk through the neighborhood with a resident who has even more background information, and indicated that our enthusiasm made him more aware again of how well things are arranged in Vauban.

On Wednesday we headed for the center of Freiburg, where we made a brief visit to Grethergelände and to the Jos Fritz bookstore. Grethergelände is also home to the Miethäuser Syndikat: an interesting organization of which, unfortunately, we were unable to speak to anyone during our visit to the city. The organization helps people and organizations set up rental projects that bypass investors in order to make housing affordable. A similar construction as in Ecodorp Boekel; the Miethaüser Syndikat seems to be at the basis of this kind of construction, with Grethergelände as its first project, and has also supported several projects in the Netherlands.

On Wednesday, we visited the old centre of Freiburg and bought, among other things, raspberries and a small Käsekuche at the market. We ate them for lunch in the Stadtgarten and then went back to Vauban in time to not be bothered so much by the heat. There we had a delicious ice cream, which was so good that Els took a second one in the evening.

Another reason why we were lucky with our hosts was the tip they gave us for our journey to Basel. For that stretch, we had planned to cycle to and along the Rhine again so as not to have to climb too much, but that would have been boring and also very hot on the sunny days that continued. Instead, we were advised to take the Schauinslandbahn: a gondola lift from the 1930s near Freiburg. Before the start of the gondola, we had to climb a bit, but then we exchanged our muscle power for mechanical power, powered by renewable energy. That felt a bit like cheating, but it was a fun experience and the view was magnificent. From the top, we only had to descend a long way to our campsite in Lörrach. It was a bit of a switch from a private bedroom to a tent on a crowded lawn, but with this weather it was nice to camp.

On Friday, we got up early and cycled further down to Basel. There, we again encountered the Rhine; surrounded by impressive bridges and buildings. In the meantime, we had also crossed a new border. We continued cycling on the Swiss side of the Rhine but actually found it a rather boring stretch, in which we did not get to see much of the Rhine. That changed at the German-Swiss town of Laufenburg, which looked idyllic and also had an opportunity to swim in the Rhine, which is not easy everywhere due to the strong currents. We ended the week a little way back at a simple tent site along the Rhine where we were able to enjoy a beautiful sunset in the evening on a small platform in the Rhine. There was also a group of young people who came to enjoy their weekend and went swimming at half past two in the morning with a lot of noise. However, this did give us the opportunity to spot a few falling stars!