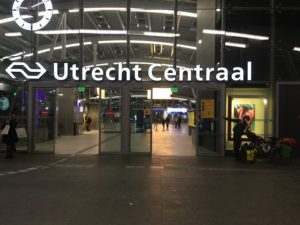 As we write this, we are back home, in Utrecht. We still owe you our stories of the last couple of days though. As we wrote last week, we were not very happy at Lake Como, so we left on Saturday for another small lake nearby: Lago di Piano. The route took us along the shores of Lake Como, alternating between road and cycle paths that popped up around the many tunnels and took us nicely around them. Until Menaggio, we cycled on the shores of Lake Como past nice villages, large villas and beautiful views of the lake. At Menaggio, we turned off and looked for a cycle path that would lead us to Porlezza. That was not easy to find, so we started climbing up a fairly steep, largely unpaved hairpin that resembled what we could see on an overview map. Eventually, we did indeed end up on a cycle route that was better signposted. Still a steep climb but eventually also a descent to our campsite at Piano Porlezza. Pim was tired of climbing and needed to recover. Els was in better condition and took a dip in the lake, but was also very tired in the evening. So we went to bed early to enjoy the last weekend in Italy.

Sunday we stayed at Lake Piano and dared to take a walk around it. We were able to do that, but it was also a bit of a climb at times and we sometimes lost the path and ended up in the middle of the forest. We took it easy and went for a swim in the afternoon, playing a game on our picnic blanket. We ended the day, and in fact the whole trip, in a restaurant with a beautiful view of Lake Lugano, behind which we could see the sun setting. We had the best seat in the entire restaurant and looked back on our journey over pizza. Pim was brave and had a pizza with Nutella for dessert.

Of course, we weren’t home yet; on Monday, we cycled on to Lugano, from where we would take the train home on Tuesday. The route led us easily to Porlezza, a nice village on Lake Lugano, but the rest of the route along Lake Lugano was more tedious. In the beginning, there were some cycle paths along tunnels, but we also had to cycle a lot along the rather busy road and finally through a tunnel with a steep uphill section on the (narrow) road. That was not fun: when we climb, we do not go very fast and most of the cars behind us do not have the patience to stay behind us and sometimes overtake very close to us. Nevertheless, we reached Lugano and wanted to have a quiet lunch in a park at Lake Lugano. There, however, we were annoyed by a couple of wasps. We haven’t had that much this trip. Very nice of course, but not so nice this Monday. Moreover, we were not yet where we wanted to be; we wanted to camp at a campsite near Lugano but had to climb a long way to get there. The path that the GPS showed us was too steep at many points so we had to walk for some time. Eventually, we arrived at the campsite exhausted and worried about the climb we would have to make early the next morning to catch the 8 o’clock train.

We had ordered our train tickets on Friday via ‘Fietsmee.nl’. Taking bicycles with us on the train is not particularly easy and can, for example, not be arranged online. After 1.5 hours on hold at Deutsche Bahn (who are able to arrange this), we looked for another way. With an email to Jan of fietsmee.nl we had tickets within two hours for the whole journey including bikes and with ample transfer times. A tip for anyone planning a cycling holiday.

To make sure we were on time, we got up at half past four on Tuesday. Fortunately, breakfast and packing in the dark went well, as we are quite experienced now. The climb back to the city and the station took a less steep road, so we were already at the station around 7 o’clock. Well in time, but therefore quite relaxed. In the train from Lugano to Basel, we enjoyed the Swiss Alps and reflected on the past few months. In Basel we had a relaxed lunch and from there we continued to Düsseldorf. In the train there was another Dutch family with three children and bicycles with whom we could chat and help each other get off the train. The whole journey continued without a hitch and so, around nine o’clock in the evening, we ‘suddenly’ arrived in Utrecht. Our apartment was well taken care of and we really enjoyed our own bed. Actually, all ordinary things are now something to be enjoyed even more: your own shower and toilet, cooking on more than one gas stove, being able to sit on the couch… You also find out again how much stuff you actually have when you unpack all the boxes after having lived out of bicycle bags for half a year.

We are going to get home, Els is going on a mini-hiking adventure in Drenthe, but this is not the last blog!

For the other beta’s among us, the numbers:

– 2 large river basins traversed (the Rhine and the Meuse with their countless rivers, canals and streams) and some others (Scheldt, Ems, Po)