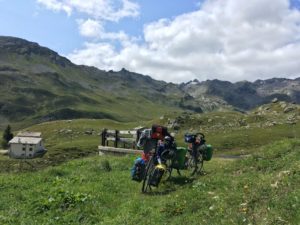 Okay, not a very original title, but everyone you tell about crossing the Alps starts talking about Hannibal. Where exactly he crossed the Alps more than two millennia ago, with all his men, elephants and whatnot is not exactly known, but we chose the Splügenpass for our route. However, we started on Saturday by looking at the Alps from a distance and further enjoying the lovely swimming water at our campsite to cool down the hot day.

On Sunday, we set off for the Alps, slightly nervous about what awaited us. We didn’t know how long it would take us, so we reckoned on 3-6 days and would see how fast it went. And actually it went very fast. On Sunday, we hardly climbed at all. We cycled along a lovely cycle path along the Rhine. The Alps were coming closer and closer but we cycled smoothly in between. Finally, we cycled 80 kilometres and ended the day in Chur. That went a lot faster than expected and in the evening, we made the other cyclists jealous with our çigköfte from a packet from the Turkish supermarket.

On Monday, it really started to climb and on a steep unpaved path, Els could hardly get up … that was not really reassuring. We cycled along the ‘Polis Path’ with, among other things, bunkers from the Second World War, high above the Rhine. Thusis loomed up a little later, with a wall of mountains behind it: there was no longer a beautiful valley to cycle through. From Thusis, we climbed up through a gorge on the Via Mala (‘bad road’), including a couple of tunnels through which cars drove. After this first climb, we had an ice cream with a view of the water at the bottom of the gorge. We were ready for more climbing, but the following part was not too bad and we reached Andeer, where there was a campsite, before three in the afternoon. The next campsite was in the village of Splügen, fifteen kilometres further on but also 500 metres higher up. We decided to just go for it and at 5pm we arrived at the campsite, tired but satisfied. Fortunately, Els had bought some delicious biscuits in the supermarket, which gave us enough fuel. Now we were really in the middle of the Alps, including cows with bells around their necks and a night temperature of 5-6 degrees.

We wanted to wait and see if we felt well enough for the last 700 m hairpin climb to the pass, but felt the urge to go further. We slept well thanks to our fleece liners (they came in handy again after a few months) and so on Tuesday morning we decided to cross the pass. It was certainly not easy, but by cycling slowly and taking regular breaks, we reached the top of the Splügen pass after about two hours. We had a short break and descended a bit more to celebrate our victory with a hearty lunch near a lake and beautiful views of the Italian Alps.

We also replaced a couple of brake pads because there was a big drop to come. And it did come, we descended on steep roads with the utmost concentration and past all the traffic. The breaks we took were no longer needed for our legs but for our wrists and fingers. The views were amazing and we ended the descent in Chiavenna with a delicious Italian ice cream. From there, it was just a short distance to a campsite by a waterfall that we could even see from our spot. Everything was beautiful here, the waterfall, the mountains, the buildings, the weather, and we thoroughly enjoyed our arrival in Italy. In the evening, of course, we ate pizza with tiramisu for desert.

Wednesday we noticed that we had asked a lot of ourselves, we also did not expect to cross the Alps in three days so we could relax. At first, we wanted to go for a walk around the waterfall, but quickly abandoned that plan. We did walk to Chiavenna, admired the town, ate cakes, ice cream and delicious biscuits. On Thursday, we did take the walk around the waterfall, which was really beautiful, and we took it easy.

On Friday, we cycled further again, to Lake Como. After Chiavenna, we followed some cycle paths, which was welcome after the busy descent on Tuesday. The views were a little less spectacular. Closer to Lake Como, it became busier again with cars but also with people on the promenades that the route also led along. We wanted to end our day at Domaso but were overwhelmed by the crowds, with campsites crammed together and lots of bathers. After considering at a quieter spot, we decided to stay for one night (and not three as we had planned). That wasn’t easy, because the campsites were packed. Fortunately, there was still one spot available and we found peace and quiet by picnicking on the waterfront while the wind was blowing very hard.

In our last blog we wrote about our day with Kevin, he interviewed us on our trip and our jobs. If you like you can watch it here.