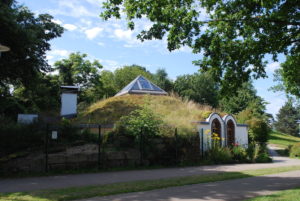 On Tuesday 10 August, we talked to Svenja Fugmann at the Ökostation in Freiburg: a beautiful building, similar to the earth houses in Olst; built with local materials to show how you can build and live sustainably. The first version of the Ökostation was already built in 1986 and after the nuclear disaster in Chernobyl, it attracted a lot of interest from people who were looking for alternatives to nuclear energy. The centre caught fire in 1987 but was rebuilt, with some improvements, because the importance of such an education centre was well recognised.

The Ökostation has fulfilled the role of education centre ever since. They receive children from the age of 3, as well as students and other interested parties from all over the world, although the focus is on primary school students. In addition, the Ökostation has become an important node in sustainable networks, with good cooperation within Freiburg but also internationally.

We also talk to Svenja about the Freiburg community and why they are so involved in their city and specifically the environment. Freiburgers clearly claim their role when it comes to local decision-making. As an example, Svenja mentions the influence Freiburgers had on space for cyclists in the city, but also the construction of a new residential area, where the Freiburg city council could not avoid consulting the inhabitants.

How the community became so involved is hard to say, but Svenja mentions several factors. The institutions and especially education in Freiburg play an important role. The Ökostation is of course an example of this. There are also many small networks active in Freiburg. So it’s a close-knit community that can make a fist together. Svenja also mentions the green environment in and around Freiburg. Its inhabitants are possibly very aware of all the beautiful greenery they have and do not want to lose it. Sustainability is also more the norm here, it is more normal to have a bicycle than in many other places in Germany.

Despite all the beautiful things happening in Freiburg, Svenja often feels that changes don’t go fast enough, especially when she reads about floods and forest fires in the newspaper. Then she realises that we really have to give up some of the luxuries we have now, but at the same time she also knows that that won’t hurt, that things can be different. The open-mindedness of the children at the Ökostation keeps her hopeful.

After our talk, Svenja showed us the waste cemetery where all kinds of waste is buried. At each grave, it was clear how long the plastic, cigarette butt or paper had been buried. This showed that most rubbish does not decay so quickly. We ended our visit with a tour of the lush garden. Our visit has shown us that the Ökostation plays an important role in Freiburg’s green community.

Listen to our conversation here: