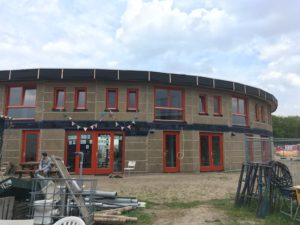 Week 5 – Finally warm and volunteering at an Eco-village

We had our earliest start so far and left Dronten before 9 in the direction of Olst. It was supposed to rain in the afternoon, so we searched for a dry place to eat the rest of yesterday’s pancakes. In the rain, we continued to the Earth Houses in Olst, an ecological village of 24 houses which people have built themselves largely from earth and car tyres, among other things. We talked extensively with Ferdi about what it’s like to live there and what it’s all about (listen to our conversation with him here). Then we cycled on to the (well occupied) city camping in Deventer and it just stopped raining when we arrived. It was also getting warmer that day and we noticed after dinner that this was the first evening camping that we stayed on our chairs for a while because it wasn’t getting uncomfortably cold yet. How lovely!

We had chosen a nice spot for the tent and woke up in the middle of the morning sun, beautiful sight! Again, we were off in time for the cycle trip to Elst (between Arnhem and Nijmegen). We thoroughly enjoyed the beautiful weather and the warmth, and also the surroundings. We cycled up and down the Veluwe for quite a while on mainly unpaved paths, good exercise for later, but tiring! Showers were passing by all the time and at some point we took shelter from a shower, while eating our first ice cream of the trip. The rain didn’t come until we were back on the bike, but it wasn’t too bad, and by 3pm we were back at the campsite in glorious weather. It was a boring camper/caravan campsite, but next to the lawn was a small orchard where we were allowed to pitch our tent. Great! We lazed around in the sun for the rest of the afternoon and lay on our picnic blanket until dark. Now we really started to enjoy our journey :).

The weather turned grey again, but it stayed warm. We headed for Nijmegen and took our time looking around at the possible future site of a housing project we are recently involved in. We will probably write more about it in the future. It was good to look around and to get a better idea of Nijmegen, who knows, maybe we will live there! In total, we didn’t cycle very far today, but pooh, all those differences in height are something we have to get used to. By the time we got to the campsite in Groesbeek, we were very glad to be able to stop going up and down. We laid in the sun again for an hour (oh, so nice!) and in the evening we enjoyed the warmth, wifi and charm of the Orangerie at the campsite.

Today begins a new experiment. We leave late in the morning to let the tent dry properly, because we don’t need it for a while. Therefore we go for a walk, visiting Gelderland, Germany and Limburg (province number 11!) in one hour. Then we cycle to [Ecodorp Boekel], which is still under construction. The rest of the week (until Sunday) we will stay here and help with the construction as volunteers. It is quite a transition to suddenly be with so many people in one place. We are assigned a temporary housing unit which we share with a ‘housemate’ and a fellow volunteer. The workday has just ended when we arrive, so we can take our time to drink tea and get acquainted with some residents and interested people (people who are thinking about living here).

The Ecovillage Boekel aims to make ecological and affordable living possible and to spread knowledge about this. A total of 30 houses will be built divided over 3 circles. The costs remain low because people who want to live there help building at least two days a week. Eventually, the people who live there will rent the houses for a price that is (just) below the price of a social housing unit. This participation also contributes to the creation of a community where people are there for each other. In addition, there is plenty of experimentation going on with ecological building materials, some of which, if they are tested and work here, can then be approved for use elsewhere. For example, a special type of concrete has been used, the walls are made of lime hemp and a battery of basalt stones is being developed for seasonal heat storage.

Our first working day as ecovillage volunteers! In the morning we are spoiled with homemade granola. At 8 o’clock we are ready to start, together with the other people who are working today. Pim is going to assemble the electrical equipment and Els is going to lay coconut mats on the upper floor of the houses. The mats are intended for soundproofing and it is quite a puzzle to get them right around all the pipes, which requires a lot of chalk and a grinder. We are busy and get to know more people. This week, a number of houses will also be completed and people can move from the temporary houses (a unit just like the one we are staying in these days) to a real house. So there is a lot going on and you notice that it is a lot for the people here as well. There is a lot of pressure to finish the houses so that people can live in them. And to be honest, helping each other to build is fun, but not very efficient, so it all takes longer than expected. We learn a lot about the different social processes and decision-making here in the ecovillage. We work with the principle of [holarchy]: a structured process of making proposals, refining them by the group and decision-making based on consent. Residents are involved in various circles (a kind of working groups) around themes such as financial, green, health, social, etc.

We continue for a day with electricity and laying coconut mats. At the end of the day, all the coconut mats in the houses are finished, which is great, because now concrete can be poured. The working days are from 8 to 15, with enough breaks in between for lots of chatting. Conversations here are often personal and almost never superficial, all kinds of themes are discussed and people are very open. It is a safe atmosphere in which you feel welcome and have the feeling that there is nothing crazy about it. In the evening, after dinner, everyone is fantasising about tasty things, and Els decides to bake biscuits and hand them out, which is very much appreciated.

Inspired by our housemate, Els gets up extra early for a swim in a nearby pond. Today, Pim goes to work on plasterboard, a very precise job with large sheets that break quite quickly. Els is asked to vacuum the houses that will be delivered tomorrow, and eventually she also varnishes a few bathroom doors. Els gets quite grumpy because of the hoover, which does not cooperate very well, but it has to be done anyway. Because of all the work and the removals, there are not many people available to cook, so we cook tonight. We make two kinds of curry, raita and, to top it all off, chocolate mousse. It’s great to be in the kitchen again and to be able to cook extensively. The food is also very much appreciated and goes down without a hitch: a big compliment of course! After a walk in the woods with two people who are considering living in the eco-village, we play another game. It is special to be in a group again for a while, after such a long time (more than a year). We also like the idea of being in one place for a while and being part of something. We will probably do something similar again.