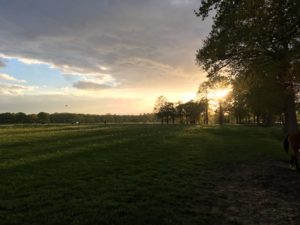 Week 6 – Slowing down in Brabant

This weekend we were still in Boekel and on Saturday we helped out with plasterboard and door-frame combinations. When we left, we were given a jar of delicious homemade granola. We said goodbye and cycled on in the sunshine through North Brabant. While cycling, we also evaluated what we took away from 5 days of volunteering in Boekel. How does it fit in with the other initiatives we visited? What common theme are we beginning to notice (and is there one at all?). We can say a few things about it:

This week we also spent a lot of time in North-Brabant. Among other things, we cycled 40 km along a canal, which was a lot more fun than it might sound now because it was quite sheltered and no cars were driving. We spent the night in a beautiful hiker’s hut on a nature campsite in Chaam, where Pim’s mother even dropped by.

In between, we made a quick visit to Antwerp to talk to Joren Hofman of the municipality of Antwerp in the New South district about the Circular South project (blog & podcast to follow, although it may take a while ;)). Our visit to Antwerp could not last too long because of the corona measures. So we went back to Brabant, finally with the wind (or almost a storm!) with us. What a relief!

We also went to the Efteling for the day, with friends who have a season ticket. It was the second day that the Efteling was open again and all indoor attractions were closed, but it was so nice to be able to do something like that again. It was very quiet so we could ride the roller coaster twice in a row. We really enjoyed it!

Now we are at another nature campsite, near Alphen. Because of the bad weather forecast for the Whitsun weekend, some places were cancelled and we now have a super-deluxe spot. The wind was very strong, so the tarp broke the first time we put it up… That is a pity, but fortunately it is still usable. Again a campsite on an estate, where we had a really nice walk on Friday night.

We do notice that it’s a lot, being on the road, volunteering, restlessness about following rules, interviews and blogs that need to be worked on, work that sometimes gets in the way… and still not really nice weather. So, coming week, we’ll take it easy and consider a new plan with (even) more rest/hiking/computer days, maybe staying in a hiker’s hut a bit more often and see if, when and how we will enter Germany.