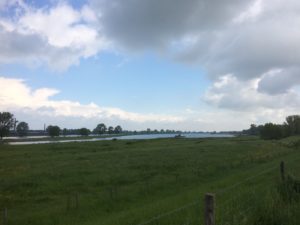 Week 7 started once again with bad weather. On Saturday, we spent the morning in our tent and took shelter in dry places on the campsite because of persistent rain and strong wind. We tried to make plans for the rest of our journey and wondered whether we should really go to Germany and, for example, where we could go for quarantine. The shelter did not help against the cold and we were glad when, at the end of the afternoon, we could take a somewhat dry walk to Alphen. Sunday was luckily drier but not less cold. Despite the cold, Pim decided to start his day with a dip in the cold swimming pond at the campsite. Els was very surprised, usually she is the one with such crazy ideas, but this time she chose a hot shower. Pim’s swim was not a good idea as it took until late in the afternoon for him to warm up a bit. We did take a nice walk through the Hoevens estate and Regte Heide and visited a nature garden. We were glad that we had chosen to stay longer in one place. After 6 weeks on the road, this was the first day we really took time to go for a long walk, something we always enjoy doing.

After Sunday, it would rain again but luckily we managed to find a camping cottage in Den Dungen near Den Bosch. That was in the direction of the river Maas and with the wind behind us, as we decided to do part of the Maas route. The Maas route is a long-distance cycle route from Hook of Holland to Maastricht that is well signposted. In Den Dungen, we found a pleasant ecological mini campsite where we could stay the whole (rainy) Tuesday: another computer day. Pim worked a bit more to finish his dissertation, and Els was interviewed by a master student about sustainable travel. We enjoyed our super cosy camping cottage, with infrared panel for heating. On the campsite they had some very tasty vegan cakes, which of course we had to try.

On Wednesday, we headed for the river Maas and followed it eastwards, with the wind behind us. We had briefly considered going to Zeeland first, the only province we hadn’t visited yet this trip. But with wind-force 4 and a westerly wind, the decision not to go to Zeeland became final (at least for the time being). After a relatively short cycling day, we reached Megen at 2 pm. With the wind behind us, 60 km is a piece of cake! At the campsite, we took shelter from some rain and then put up the tent and tried out the tarp again. It was nice to cook and eat in the drizzle under the tarp, but not so nice to have to get out of the tent at 2 am because the tarp had been blown off and we had lost two pegs.

Thursday was wet. We stayed in our sleeping bags for quite a long time in the morning before getting out of the tent and had to take down our tent in the rain and continue cycling in the rain. We had quite enough of it by now… At the end of a rainy day, we arrived at the nature campsite het Smokkelpad, near Groesbeek, right next to the border with Germany. It seemed to be getting dry at last, although we didn’t dare trust that yet. When we were told at the campsite that we could only stay for one night (attempts to contact them before our arrival were unsuccessful), we really reached our limit: we needed a break. Fortunately, eventually we were allowed stay for two nights.

Friday brought relief. Early in the morning, it was still a bit cloudy but when the sun finally broke through, we slowly started to get some energy again. We did our laundry, took our time and went for a walk in the beautiful surroundings. And we were able to agree on staying here for a week to enjoy the forecasted beautiful weather and recover from the cold.

So our limit was reached this week, and the German border too. Unfortunately, we are not going to cross it for the time being, because apart from all the strict entry requirements, the sanitary facilities on the German campsites are not open. Next week, we’ll slowly start making new plans, who knows, maybe we’ll follow the river Maas further south after all.