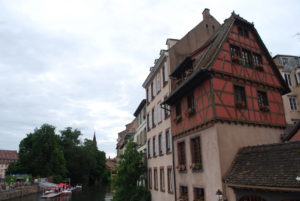 On Saturday morning, we left Metz, and it immediately became clear that this would be a day with a lot of climbing and descending. There were no straight stretches, and for a while we had to travel along a busy road. Fortunately, that got better later on, but no cycling paths this day. Pim cycled a few extra kilometres to buy bread. We had heard before about northern France being desolated, and we could agree with that today. Especially when, after almost 80 km, we arrived at the campsite, which turned out not to exist anymore. There were still signs, and even a three-star sign with ‘camping’ at the reception, but it was now a cottage park. So, there we were. The next campsite was over 20 km away. Fortunately, we had food with us and so we cooked a meal along the way that tasted very good. Finally, at 7:30 pm, we arrived at a municipal campground in Mittersheim, with over 100 km on the counter and 850 m of climbing. The reception was already closed and would remain closed on Sunday, so we left some money in the mailbox of the campsite. As a reward, we had a beautiful sunset, which we enjoyed very much.

On Sunday, we were quite tired, which was not surprising. We cycled 40 difficult kilometres to the next campsite. It was strange weather again, quite oppressive with very heavy-looking clouds at times. Fortunately, all three times that it really broke loose, we were able to take shelter, once even at a cosy crêperie with a cup of tea. We decided to stay at the campsite for the day as we really needed to rest. Unfortunately for us, it was Sunday so we had nowhere to shop. But with our supplies, a jar of pasta sauce and a bag of muesli that we could buy at the campsite, we could still improvise enough meals. For example, muesli soaked in water for breakfast is said to be very healthy as well (but we have to admit that it tastes better with soy yoghurt).

The campsite was situated along the Marne-Rhine canal and on our rest day, we went for a short walk in the area. There didn’t seem to be much going on, but only 5 km away we came across a glassworks with an open workshop where you could sit and watch glass art being made. And a few hundred metres further on was an inclined plane. That was a basin of water driving a concrete wall up and down, from the higher to the lower canal and vice versa. Funny to watch. At the end of the day, we felt rested.

The next morning, it was raining cats and dogs, and in the pouring rain, we got on our bikes. Against our expectations, today was an easy day. We cycled through the Vosges Mountains and then to Strasbourg, but the whole route was along the Marne-Rhine canal, which made it very easy to do: mostly flat with the occasional bump at one of the more than 50 locks we passed. We had booked a hotel in Strasbourg because the weather seemed to remain unsettled for a while. And 2 km from our hotel, another huge thunderstorm erupted, and we stood with several others under a viaduct. We had a hotel room with a kitchenette and bath, so we enjoyed the luxury again (and the toilet seat!) and went to sleep in time.

Wednesday was again a lot of computing, but we also had a very nice meeting with someone from the City of Strasbourg about promoting biodiversity in the city (podcast and blog can be found here). After that and before that we walked around Strasbourg looking for city nature and façade gardens. It was great fun to walk through the city with such a different perspective.

Despite the weather forecast, it had not rained during our stay in the hotel… but when we left Strasbourg it was not long before it started raining again. We did manage to have lunch in time in a beautiful park and then cycled across the Rhine to Marius, whom we had met during our voluntary work in Belgium. He lives with his partner and 4 others in a house with a large garden just across the German border. We were warmly welcomed and had a pleasant meal with everyone. In the evening, we went on an adventure in the forest to look for mushrooms. We did not find any, but we did find wood for a possible campfire.

A little later, we got into the car with our headlamps to go ‘dumpster diving’. Neither of us had ever done that before, but to Marius it is quite normal. So we drove to a supermarket nearby, snuck past a corn field to the back of the supermarket to see what was in the bins. And even though it was only half a bin, we still had a big catch, including 1.5 kg of parsnips, radishes, apples and a lot of peppers. The vegetables were thrown away because they were not quite right or past their sell-by date, but in general they are still good to eat.

On Friday, Marius and his girlfriend Liane took us to the Black Forest for a beautiful hike. On the way, we looked for mushrooms and picked lots of blueberries. Great fun to do. And it is also very satisfying to make risotto in the evening out of mushrooms you picked yourself, together with roasted parsnips and peppers you saved from the rubbish bin.