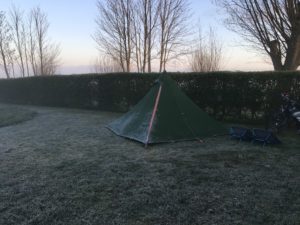 Week 3 – The north wind plays tricks on us

We left Hoorn in good spirits, with two large pieces of date cake for the road. We had 75 km ahead of us, the longest day so far. And still wind force 4. First from Hoorn to Medemblik and then along the dike to Den Oever. 20 km along the same dike against the wind became a bit boring. We could skip the part against the wond across the afsluitdijk because it was closed to cyclists for the next few years. We were able to join a cycle bus and were dropped off at Kornwerderzand. From there we cycled through the Frisian countryside to Slappeterp, where we were again warmly welcomed by Pim’s family. After 75 km of wind against us, we had had enough, but now we know we can do it if necessary.

Why are you moving on already? There is still so much to see in Slappeterp! Says our hostess. In the morning we walked with her to the beautiful nature campsite and swimming pool with a helophyte filter. Nice to see. Then we got on our bikes again, still with a headwind and today also cloudy and grey. As we cycled, it slowly cleared up and when we arrived at the campsite in Kollumerpomp, it was quite sunny, but cold. For the first time since a week we put up our tents, we thought it would be fun, but it was not. From half past two at night we lay awake and Els was too cold to fall asleep.

Els left the tent at half past three and went to the toilet building (where at least it was not freezing) while Pim got Els’ sleeping bag, but also did not sleep very well anymore. It was not very warm in the toilet building either and after 1.5 hours of googling for hotels in Groningen, Els started walking outside while the sun slowly rose. It was a beautiful sunrise with fields full of hoarfrost, but really nice was different. We let the tent ‘defrost’ in the sun and after a broken night cycled calmly, and for the first time with the wind behind us (!), to Groningen. There we checked in at Labnul50/HetPaleis (highly recommended), took a powernap and cycled on to Groningen Airport (in the province of Drenthe, haha) for an interview about hydrogen (blog/podcast can be found here). We were so tired that we forgot our bicycle lock and more things went wrong. Exhausted, we went to our warm hotel bed at 21:15.

After 11 hours of sleep in a warm bed, we felt a lot better. But we wouldn’t be able to continue like this, so Pim made an appointment at the Bever to buy fleece liners. We took it easy on this King’s Day, but we did see Pim’s 6-month-old second cousin for the first time and we ate pizza and orange pancakes.

After another warm night in our cosy hotel room, we left again to go to TuinindeStad. A kind of green sanctuary where anyone with an idea can come and do his or her thing. There is a self-harvesting garden, a plant nursery, a mud main building with greenhouse, a nature playground and a camping field called ‘TentindeTuin’. We were warmly welcomed by Frans Kerver (the manager) and had the field to ourselves. Only an hour after our arrival, he came up with a paper full of ideas for projects/people/initiatives in and around Groningen that we could visit. We were clearly in the right place here. Later in the afternoon we cycled to Haren, where Els had another talk with Tineke van der Meij about hydrogen. Pim went to see ‘De Biotoop’: the former biological centre of Groningen University, now managed by CareX, a public housing company. It is a living-working community where, for example, several studios are located, which becomes immediately clear when you walk around and is also reflected in the layout of the houses in the former laboratories.

The day started dry but very soon it started to rain and it didn’t stop. Els still had work to do on her paper (the last drops are the heaviest…) and could fortunately sit inside the mud building, as outside under the roof it was really too cold to type. Pim had the carrier of his bicycle welded back on because it had come loose. At the end of the afternoon, Frans took us by car to the impressive Gasunie office in the pouring rain. There we had a talk with Sietse Wijnstra about the NortH2 project. Again about hydrogen, which many parties are working on here in Groningen. We also decided to stay a bit longer today and to take it easy anyway. We will be in Groningen until Monday, so it’s a whole week.

The past few weeks have been pretty full, so we both noticed that it’s quite nice to suddenly have a day that isn’t fully planned yet. With Frans’ list of initiatives in hand, we decided to cycle to Ten Boer today (still in the drizzle). There, we visited a tiny house village, a world living room made of loam and straw plus a number of yurts and a large self-harvesting garden. We talked to some of the people who live there and heard from everyone how much they appreciated the peace and quiet. On the way back we walked through the centre of Groningen, still a bit strange that the shops are open again and people are sitting on terraces. At the campsite we cooked well for ourselves again and drank tea in the drizzle in our tent while working out new plans.