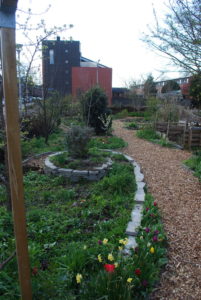 In the afternoon of Tuesday 13 March, we met Rutger Spoelstra of Stichting Groenkracht in the Popta Garden in Delft. That morning, we had been able to cycle a short distance from Rotterdam to Natuurkampeerterrein de Grutto, and we had just put up our sopping wet tent. The sun that shone on the beautifully laid out Popta Garden was very welcome after the harsh weather of the previous days. Rutger led us through several gardens in Delft, showing us how they are a source of food, and contribute to nature and community building.

The Popta Garden where we start is next to a school and a road between blocks of flats. At the edges and in the shade, some shrubs and trees have been planted and are managed communally. In the middle, in a nice pattern, there are several vegetable gardens and school gardens. All are about the same size but have different shapes. The gardens are separated by old paving stones that used to cover the area where the garden is now. In addition to plants, various spots have been created where residents can sit and relax. When I talk to Rutger, the sun is shining and we are not the only ones who want to spend time in this lovely garden. Some residents drop by to see how the walnut tree is doing. It is important for the long-term involvement of the residents that they are involved in the design and layout of the garden from the very beginning. Stichting Groenkracht came to help because there was a demand from the neighbourhood, but tries to set up the gardens in such a way that the neighbourhood can manage them itself afterwards.

The next stop was the ProGrotius school. A short stop where Rutger points out the gardens through the fence. This also illustrates the educational role that Stichting Groenkracht has. They provide all kinds of courses on gardening. This is also an important part of the CampusFarm at the Delft campus. Students can rent a vegetable garden there for a year but can also take courses in the green spherical greenhouse found there.

Another neighbourhood garden can be found at Stuiverpad in Delfgauw. This garden is surrounded by new single-family dwellings with a nursery nearby. The emphasis in this garden is more on the communal. Vegetable gardens are also managed collectively. A little more experimentation is possible in the Papapvertuin, next to the sustainability centre de Papaver.

Rutger applies the principles of permaculture in the design of all the gardens. Important is that the garden is adapted to the local circumstances. This means taking into account shade and wind, but also other plants, animals and people. A thistle in the garden can be a sign that the plants you want will not fit there. Planting something that has similar needs to a thistle, such as an artichoke, might just work. Shrubs and pools can also be used to attract birds and toads, which helps keep the insect population manageable. Rutger calls this a dance with nature. Responding to the people in the neighbourhood means, for example, that in a neighbourhood with people who have time, relatively more vegetable gardens can be found, while in a neighbourhood where people have less time, the emphasis is more on the communal part of the garden. So each garden is attuned to its surroundings, with a role in food supply, an educational function, nature values or a social function.