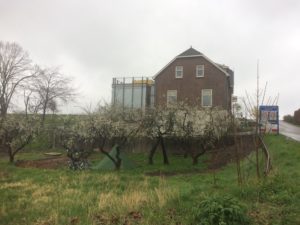 The Veerhuis in Varik

On the first day of our journey, we arrived at the Veerhuis in Varik late in the afternoon. This used to be the home and workplace of artist Pieter Kooistra, who developed ideas in the 1980s and 1990s about a basic income for everyone in the world and how to finance it.

The mission of the Veerhuis is in line with the broader awareness that our current economic system with its focus on profit is no longer tenable. The question then is: how do you put a new economy next to an old economy?

As a place of action and knowledge, the Veerhuis is above all a place for simply doing and trying out the new economy. A recently started experiment is the purchasing of the Veerhuis’s land through a “crowdfun action”. Land is often a speculative object in our current economic system, and some of its value is lost sight of. Buying the land and taking it out of the system may helpt to better protect its values.

The Veerhuis land was taken out of the system by managing it as a “deelgenootschap”. In practice, this looks like triple ownership. There is a foundation as legal owner, an manager and a community. The community consists of the purchasers and the Veerhuis’s surroundings. It determines what happens to the land.

The community is key in Henry Mentink’s initiatives. A characteristic quote is ‘Relationships come before benefits’. A strong network of people ensures that initiatives and organisations continue to exist. This was also the case for the new location for a “wereldwinkel” in Grootebroek, which could not have been financed without investing time in building up a customer base. And it is true of the car-sharing company MyWheels where the community plays an important role in managing the cars.

The joint venture that bought the land of the Veerhuis is currently thinking about what essentially needs to be protected. “The Source” is what Henry calls it. After all, if the goal is not to make a profit, then there is another goal that a company or organisation can work towards. Companies that work from such a source fit well in a new economy, and in the Veerhuis companies can be helped to find that source and translate it into their business operations. Instead of selling a business, they look for something or someone who is capable of taking good care of it.

Trying out, building relationships and looking for the source. These are key elements in a new economy that we are likely to encounter more often on our journey.

Want to know more about the Veerhuis? Check out the website.

One thought on “The Veerhuis in Varik”