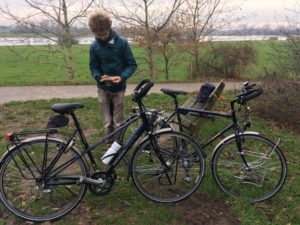 The preparations are in full swing

How do you start?

In November 2020, we decided to make this trip and the first ideas slowly started to get shape. We found that first period quite difficult, our idea was still quite vague; ‘cycling towards sustainable projects’. Yes, that could be anything, and precisely that great freedom, which of course appealed to us, also made us a little indecisive. Where do you start?

We are two people with a similar drive, but of course there are also many differences between us in what we find important, but also in our approach. One Christmas holiday, for example, we were sitting next to each other on the couch preparing our trip. Pim wanted to make a kind of step-by-step plan, on a higher level, of what kind of things we should do to prepare the trip. Els was a bit passive and impatient, this approach did not work well for her. So she just started shouting: “I want to visit a seaweed farm, that sounds cool!” and “I want to do something with the recycling of wind turbines. And I think it would be fun to go to Freiburg”. This enthusiasm was eventually a starting point for brainstorming and for determining the first contours of a route. But thanks to Pim, we also had a huge list of to-do’s in different categories, such as projects/purchases of camping gear/website/house etc, including deadlines. And that was a great help in the weeks that followed. It allowed us to keep each other sharp in what we had committed ourselves to do that week and not be overwhelmed by all the possible things that still had to be done.

It is great to see how much we can complement each other, but also good to realise that our approach differs and that we also gain energy from other things. In the coming six months, we will experience this many more times and probably get to know each other even better.

What have we already done?

What has happened in the meantime? Well, we’ve been fanatically scouring the internet for second-hand panniers and GPS devices. We bought second-hand Koga bicycles with which we cycled from Wageningen to Utrecht on a very cold December day, so that we could give them a trial run. And we immediately learned that your hands and feet really do get much colder than when you’re walking!

Pim was given beautiful green backpacks for his birthday, a very lightweight chair, a super-fancy pair of cycling trousers and a charger to connect to the hub dynamo. We bought a collapsible backpack, Els looked into podcast recording equipment and Pim spent evenings making the website more attractive and assembling the dynamo charger. All our purchases were preceded by thorough research, because we are critical and everything has to be as sustainable as possible. But at the end of it all, we’re also going to do something we’ve never done before, so it’s sometimes difficult to judge. And the fact that all the shops have been closed for so long doesn’t help either. There’s nothing to look at, to feel, to see, or someone to get advice from.

Nevertheless, we are continuing steadily and everything is taking shape. The first projects have been approached and we have already received a number of positive reactions. The first podcast guest has confirmed, and a test camping weekend is planned! And so April is slowly but surely creeping closer… We will have to see what is possible at that time, but fortunately the natural camping sites in the Netherlands are open (upon reservation). That at least gives some freedom. We are also looking forward to visiting friends and family, some of whom we have not seen for over a year. So, a tour of the Netherlands, visiting projects, friends and family, seems to us to be a very good start of the journey!