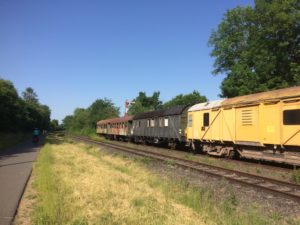 Week 10 – from the Maasroute to the Vennbahn: Luxembourg here we are!

The weekend was different for both of us. Pim stayed at the campsite in southern Limburg to do some computer work and paid a short visit to Maastricht. Els was in Haarlem for the weekend and played rummikub with her grandmother and swam in her favorite dune mere. We both bought sandals though: cycling on walking shoes became less and less fun with this hot weather.

On Monday, Els came back to Elsloo with her bicycle, borrowed panniers, vaccination booklets and new energy and we cycled to Eijsden, just south of Maastricht. For us, as yet, the end of the Maasroute. The swimming water at the campsite was very welcome with the warm weather.

From Eijsden we went for a day of hill cycling, advised by Pim’s brother. We cycled up and down the hills past all kinds of beautiful villages and ate cherry vlaai. The views were beautiful and we got more and more a foreign feeling. In Vaals we stayed for two nights, again on the border with Germany.

On Thursday, the time had finally come, with over 2000 kilometers on the counter, we cycled across the border with the attention to stay abroad for the coming weeks. We took the Vennbahn cycle route from Aachen to Troisvierges in Luxembourg. The Vennbahn is an old railroad line specially transformed into a cycle path, and it felt super-deluxe. Nice asphalt, no other traffic, regular information boards and resting places, what more could a cyclist wish for!

Because we are not allowed to stay longer than 48 hours in both Germany and Belgium without a negative test, we had to cycle the route in two days. In itself doable, but with 31 degrees still quite heavy. Fortunately, it’s June and the days start early, so on Thursday we got up at 5:30 am to cycle away from the campsite a little after 7 am. That sounds very early, but we weren’t even the first because two other couples had already left before us. We were happy with our early departure because the first 40 km of the route consisted of a slight incline. So at 11 am we had already done that. At half past 2 pm we arrived at the campsite ‘La Plage’, with a narrow green strip along a lake where you could not swim. Fortunately there was a swimming pool on the campsite where we could cool down. Also the matches Belgium-Denmark and Netherlands-Austria were easy to follow by the sound from the terrace at the campsite.

Friday we left a little less early, the day would also be less heavy and more descending. We liked this part better than day one: there were more views, old railroad bridges, and even a tunnel where the lights flickered when we cycled through it. We also crossed the watershed of the Meuse and Rhine basins. In the afternoon, it became very warm again and Els found it increasingly difficult, especially when, after a long climb, the slope became even steeper. That’s something different than climbing up a dike in the Netherlands. At the end we reached Luxembourg! We can stay there for a while to be able to return without quarantine for a vaccination in the Netherlands. Meanwhile we enjoy the weather and make new plans.