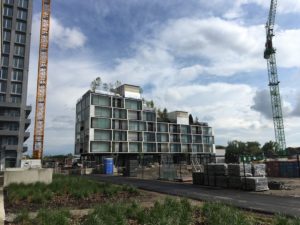 Circular South – A sustainable neighbourhood in all dimensions

On Wednesday afternoon, 19 May, we met Joren Hofman, project manager of the Circular South project. We walk with him into the pouring rain, in the Nieuw Zuid district of Antwerp. Fortunately, it stops raining fairly quickly. In any case, the conversation with Joren soon turns to how the water storage is organised in the district. And that is impressive. In the neighbourhood itself, all the rainwater is collected, maximally infiltrated and reused: it is well prepared for a future increase in rainfall. In the adjacent park under construction above a four-level underground car park, the rainwater from the surrounding buildings will be collected. This water will be partly purified into drinking water to be used for households in the neighbourhood, which is quite special. It will also be used for cleaning the municipal vehicle fleet and watering the trees and plants in the city. Water has clearly been given a great deal of thought in this district, and that applies to many other things.

The district will be built according to the old Roman model, consisting of a main street with several side streets with flat blocks. About half of the dwellings are already inhabited, a large part is still under construction. In addition to paying attention to water storage, the construction also took into account sufficient insulation, light, views and greenery. In addition, a heat network has been installed (the first and largest heat network in Flanders) that is currently still powered by heat from a central gas plant, but which in the future will be powered by alternative heat sources. Electricity generation is more difficult, partly because many of the buildings already have plants on the roof. In order to still be able to offer sustainable electricity, an energy cooperative has been set up and roofs and facades around the district are also included in the search for roof space.

Attention has also been paid to forming a new community in the neighbourhood. There will be a community centre, but Joren also talks about the various initiatives to involve residents in choices in the neighbourhood and to let them make sustainable choices themselves. From 2018 to June 2021, a large European project ran in this neighbourhood via the UIA (Urban Innovative Actions) with the aim of giving residents a sustainable nudge via various experiments. Experiments were carried out in the fields of energy, water, waste and materials. What succeeded and what failed? What lessons were learned and how do you ensure that sustainable development continues when the project (and therefore the money) stops? You can hear it in the podcast (Dutch only):

“Circular South is an initiative of the City of Antwerp together with partners Vito/EnergyVille, EnergieID, iMec, Pantopicon, Kringwinkel Antwerpen, Digipolis, Ecopower and with the financial support of the European Urban Innovative Actions programme and the Vlaams Stadsvernieuwingsfonds.”