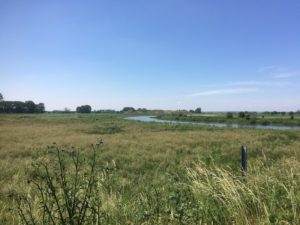 Week 9 – Coming to a standstill along the River Maas

Saturday we had a day of the housing project we are participating in (we are going to write a blog about it!) with a zoom meeting in the morning with presentations. In the afternoon we met live in Nijmegen in small groups and did various activities at different locations. It was really nice to see the people with whom we have been video chatting for a few weeks now. In the evening we had the opportunity to go out for dinner with a few people in Nijmegen, so nice that we can do that again! We spent another night in the monastery garden and got on our bikes again on Sunday to continue our trip down the river Maas. Again past Groesbeek, and later across the Maas and further through the Maasduinen. We cycled the wrong way, but that did result in a nice break with a view of a lake. In the evening, we stayed at a campsite with a food forest in the making, where there are now at least a lot of poppies.

On Monday, we continued along the Meuse, now really through Limburg. We enjoyed cycling along the Meuse, sometimes right along it, sometimes from a distance and sometimes suddenly a bit through the woods. We cycled through Venlo, where Els was moved by the image of the ‘Peaceful Warrior’ who ” Fights for something new. Something we all know, crawling under our skins. Subconsiously we feel it. Things have to change on this beautiful planet” (according to a piece of text on the sign near the statue). Along this section of the Meuse route, there are also 10 works of art that have been specially created for cyclists along the Meuse route. They are all works of art that you can sit on, so that’s what we did when we came across a gigantic bench with a view of a ferry. The nature campsite that evening was quite crowded with other small tents, nice to chat with others about tents and cycling trips. On Tuesday, we cycled again. This part of the route was very winding, so the expected 45-50 km eventually became almost 75 km. Fortunately, we are now able to do this well and we arrived at the campsite in picturesque Elsloo at half past three. We only had to be careful to drink enough in this heat.

In Elsloo, we wanted to have a rest day anyway and we made a very beautiful poetry walk through the gardens of Elsloo Castle, including footpaths in the stream (and little gnome houses). We were also thinking a lot about what we should do. The vaccinations are going fast… So should we wait for that? Would France become code yellow or would it remain orange? Oh, Germany will be code yellow but you have to show a negative test for just about everything (terrace, camping, etc). It remains tiring to have to make new plans all the time. We find it hard not to have a plan, because then there is no sense of purpose or direction. But making a new plan every time costs a lot of time and energy and has to be changed again and again. We also lack a routine. So we thought about that and finally decided that Pim would stay on the campsite a bit longer and work a bit, while Els would go to Haarlem for a few days. By train, for the first time this trip! Then we can also collect our vaccination records at home. And besides that, the seams of our new panniers are coming loose one by one, which we really are annoyed about… We’ll bring them to the repair shop while we can borrow other bags from Pims’ uncle in the meantime.