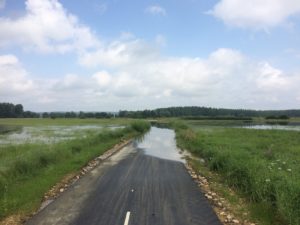 Week 16 – From the Meuse to the Moselle

Saturday we left Belgium, on our way to Italy! But first; France. We were on the Semois river and wanted to go to the Meuse river, to follow the Meuse route. To get to the Meuse route, we had to climb away from the Semois, over a steep and not very cycle-friendly forest path. But we succeeded and a little later we rode almost without noticing it into France. The landscape immediately became French too, with rolling hills full of round straw bales, sunflowers and all sorts of small villages. We cycled along the Meuse river on a partly flooded cycle path (we were very happy with our sandals!).

At the end of the day, it looked like it was going to rain and thunder, so we were glad to be at the campsite. We had pitched our tent and tarp just in time, but the tarp was a bad idea. The thunderstorm was so fierce that the tarp and the tent pegs were blown off and Pim tried to put the pegs in while Els held the pole and tried to keep everything dry. Pim got soaking wet and took a hot shower. We were quite shocked but we got away with it. When another heavy shower seemed to be coming on Sunday, we decided to take shelter somewhere, especially with our leaking panniers. Eventually, we stood with 5 Dutch people (all from Utrecht!) in a hut with a lot of bird droppings and cycled on in a convoy to Verdun when the rain stopped.

In Verdun, we had a rest day and did a lot of computer stuff. We also walked through the city, past the Citadel and an installation about the history of (the area around) Verdun. We were informed that our new panniers would probably be delivered on Friday in Metz, which meant that we had an extra day to spend. That’s why we decided to cycle only 20 km on Monday, to a campsite that seemed nice. We were lucky: it was a nice and rather small campsite where we could look out over the Meuse river that flowed past it. And to Els’ great happiness, there were toilets with toilet seats and even toilet paper, both of which are sorely lacking on French campsites. There was also good wifi, electricity and a table football table, so we had a good time.

It did start raining on Monday afternoon and continued to do so the next morning. Tuesday was therefore a bit of an ‘everything is wet’ day. Wet tent, wet tarp, wet towels, wet clothes, wet shoes etc. The whole day consisted of looking out for big dark clouds and hoping we wouldn’t get more wet (especially the broken panniers). We ate our lunch in a very bare bus shelter, but with our chairs it was still comfortable and at least dry. In the afternoon, the weather improved and we overcame a few steep hills to make a diversion to the supermarket and campsite, which were a bit off the beaten track.

The campsite was next to a TGV line and despite its 3-star status, it had no toilet seats, but it did have a small swimming pool. We pitched our tent opposite an encampment of more than 10 very luxurious caravans (‘Airstreams’ they were called), including large and expensive cars and even 2-person scooters brought along in the back. And there we were with our bicycles and a little gas stove…

On Thursday, after another tough climb, we cycled towards the Moselle, which we followed all the way to Metz. We passed an aqueduct from the 2nd century A.D. of which a number of pillars were still standing. In total, the aqueduct across the Moselle had been over 1 km long, very impressive what was possible back then. Furthermore, our new panniers would have been delivered at the outdoor shop in Metz, so we went there immediately. Fortunately, someone in the shop spoke English because they knew nothing about it, but the bags were there! Three cheers for this and we can continue cycling with less worries.

The city campsite in Metz was our next stop, and is a 5-minute walk from the city centre, so we could explore the city. There was a light art festival with the theme ‘water in space’. We walked around the city in the dark and enjoyed the works of art, from a mirrored construction in a church to a light show projected onto the cathedral. Metz was already beyond expectation. On Friday, we went back into town and walked past some more works of art, and we concluded that Metz is really a beautiful, green and lively city. That is actually the greatest thing, when you have no expectations and it turns out to be so nice.