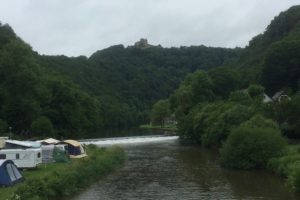 We spent the weekend in Troisvierges. Saturday was hot and we took a dip in the swimming pool at the campsite and ate ice cream with our feet in a small stream. Els also made a very badly signposted walk. It was really starting to look like holiday now. Saturday to Sunday we had big thunderstorms and rain. Not as bad as in some places in the Netherlands or Belgium, fortunately, but a thunderstorm in a tent is always a bit scary.

On Monday, we packed our stuff to move on in Luxembourg. We were used to being able to cycle 60 km in one day quite easily, but this was harder. Because of all the climbing and descending, but especially the steep climbing, Els had had it pretty soon. After about 40 km, there was a campsite and we decided to call it a day and recover a bit. This was really different from the Vennbahn, which rises gradually for the most part. In the evening, we were just in time to set up our tarp so we could cook and eat in the pouring rain, which was actually quite cosy.

Because Monday was so challenging, we decided to keep Tuesday short. We would start with a steep climb after which there would be several campsites where we could stop. The climb was indeed long and on top of that it started to rain. The rest of the day remained quite wet and we were glad to find a dry shelter at a railway station. After the descent, the scenery became beautiful, along the Sûre, through high forests, where our campsite was also located.

Wednesday started with waiting until we could call for a vaccination appointment. That was possible from 10 o’clock. The inconvenience was that we thought we could not call the phone number from abroad. This meant that we had to call another number every time to get a connection. Our mothers also helped, but unfortunately without success…

By 11 o’clock we went on anyway. We knew that there would only be a climb at the beginning and then a much flatter part.  Moreover, there were enough stations along the way to be able to use the free public transport in Luxembourg if the stretch would still be too long. But those trains were not necessary. The weather got better and so did the road. From Ettelbruck, we cycled through a valley to Luxembourg, on well-signposted cycle paths with occasional places to get water or to use the toilet. This was a lot more relaxing than riding along a motorway with climbs and hairpin bends. So we went at full speed and cycled almost 70 km despite our late start. We also passed through Luxembourg, a very special and beautiful city!

So on Thursday, we decided to go and explore the city for another afternoon, unfortunately this time in the rain, but we enjoyed wandering around the city. Earlier that day we were ready to call again at 8am and this time it worked! So next Saturday we will be vaccinated in Maastricht, hurray!

On Friday we made a bicycle trip to Esch-sur-Alzette, where we checked out the town and visited the Maison de la Transition. This is an eatery and shop, but also a place where all kinds of workshops and activities are organised around sustainability. We would have liked to speak to someone from the organisation about how you set up such an organisation and involve people, but unfortunately, we did not manage to make contact. We did have a nice lunch there though. On the way back, Pim got the first flat tyre of this trip. It was bound to happen! Fortunately, it was still possible to cycle with regular stops to inflate the tyre, and the tyre was repaired at the campsite.

One thought on “Week 11 – Crossing Luxembourg”